Posted on 10/11/2019 by BATTERIE
Looking forward to presenting my talk – ‘Composing Music For Games’ and taking part in @emcaustralia
This is actually the first time I’ve presented this talk at a publicly accessible event in Sydney. Every other time has been at closed sessions at Sydney Uni or for APRA Amcos in Melbourne. So If you’re interested to hear me present my experiences, creative, collaborative and technical meathods of composing game music (including lots of video and audio examples) this could be your only chance..
Last chance to grab your conference pass before it all kicks off on Wednesday: http://bit.ly/EMC19TIXFB
EMC [Electronic Music Conference] Is a annual conference in Sydney all based around electronic music with industry talks, work shops and live performances over 2 days.
13th & 14th November. Get into it !
My talk is scheduled for 3;30pm on Thursday 14th November
https://www.electronicmusicconference.com/speaker/jared-underwood/
I can offer 20% off ticket offer for any friends/colleagues that might want to attend.  Send me a message and i’l send you the VIP code.
#EMC2019 #TheNextNow #electronicmusicconference #electronicmusic #OneMoreLineMusic #ThumbDriftGameMusic

BATTERIE will be returning to play Lazy Bones Bar in Marrickville – Sydney on 3rd June 2019.

Come along to hear BATTERIE play some original retro tech, synth pop, break bit and his game soundtracks for ‘One More Line’ and more. Noemme and Beldame will be playing some original neo soul & electro pop in full band mode.

Hope you enjoy this short video trailer offering a taste of the fun times had at PLAY FARE
A Mini Indie Gaming Festival at 107 Projects Redfern.

Held on Saturday March 2, 2019, Play Fare was a day-long showcase of indie games, presented by 107 and Mountain Goat Beer. With games from over 20 local developers, industry talks, live music curated by BATTERIE, and a gallery of classic arcade games curated by 1989 Arcade Bar, Play Fare was our first foray into the world of indie game design in Sydney.

They are an art rock band that combines rock, prog, folk and electronics. With interesting instrumentation including ; electric cello, violin, and bassoon.

They formed in 2002 and are touring Australia presented by Rhythm Section Bookings.

BATTERIE will be supporting on these dates –

Here is a video of the band playing live –

Posted on 18/02/2019 by BATTERIE
BATTERIE is super excited to announce 107 Presents: Play Fare
Its an all day/night mini Gaming festival. An event that celebrates indie gaming culture and gaming community in Sydney.I had the pleasure of curating the live music acts. Myself and the 107 team have been working on this program for months. Its going to be so much fun !
This is the first time an event like this has happened in Sydney (as far as I know). I was inspired by the supportive scene for gaming sub-culture in Melbourne at events I have played at in the past like ‘Square Sounds’ and wanted to be proactive and get something going in Sydney for indie game devs, and game music artists.This event will feature;
20+ Indie game developers showcasing their original games
5 diverse live music acts that are all game related
DJ Peret Mako (LA Noire sound designer) playing game inspired tunes
Industry talks and workshops
Gaming Art
Retro console and arcade games to play
and BEER .. not just any beer. But a special run Gaming Label brew from principal sponsor Mountain Goat Beer

I’m looking forward to just being there, but also playing my live set as BATTERIE at 10pm on the 1st March 2019 at 107 Projects Redfern. Free entry. Full program of events and contributors to be announced soon.

Be there or be a disappointed square !

Looking forward to playing along side 3 other experimental acts this coming Wednesday 5th December at The Hideaway Bar in Enmore- Sydney. Last BATTERIE show for 2018.

Number 22 in the resurrected series of improvised, experimental or just plain weird yet beautiful music nights. Still blending the acoustic with the electric, the subtle with the bombastic.

With more than 100 electronic acts performing and a massive audience all camping next to the river in the forrest. 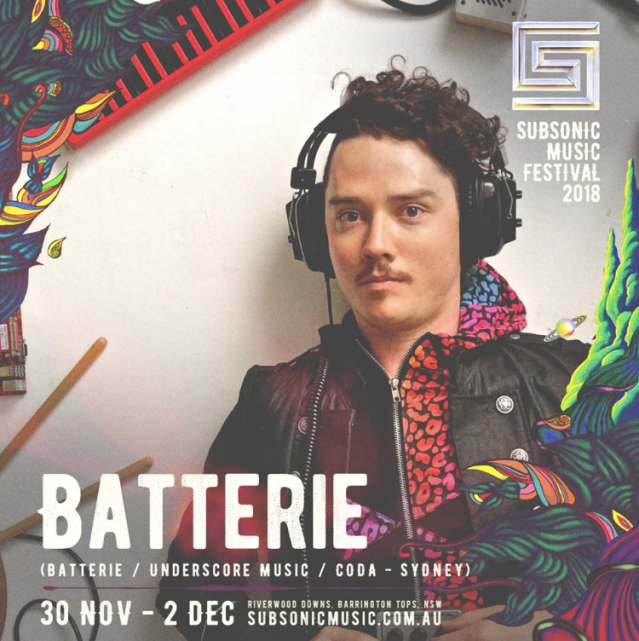 Super excited to be playing a live show in Sydney at The Lady Hampshire Hotel in Camperdown on November 8th. Its Free entry !

with support from VICTORY ROAD a wildly energetic Chip Tune act from Gosford who plays explosive pop punk anthems on a game boy !

Get your game on for a night of glitchy chip tune, synth wave, break bit, electronica and indie game music as BATTERIE and VICTORY ROAD level up !

Feature article in THE AUSTRALIAN

How exciting to be featured in The Australian  news paper !

If you were having lunch at a cafe or waiting for a flight, you might have flipped through The Australian and seen a story by national music writer Andrew McMillen about my experiences as a freelance game music composer. Andrew and I had a good chat recently at an APRA conference called The Melbourne Sessions where I presented a guest lecture on composing music for games.

Thanks to APRA AMCOS for inviting me to be part of their conference and thanks Andrew McMillen for being interested to interview me and write a story about my experiences composing music for indie games in Australia.

Here is a link to the story- 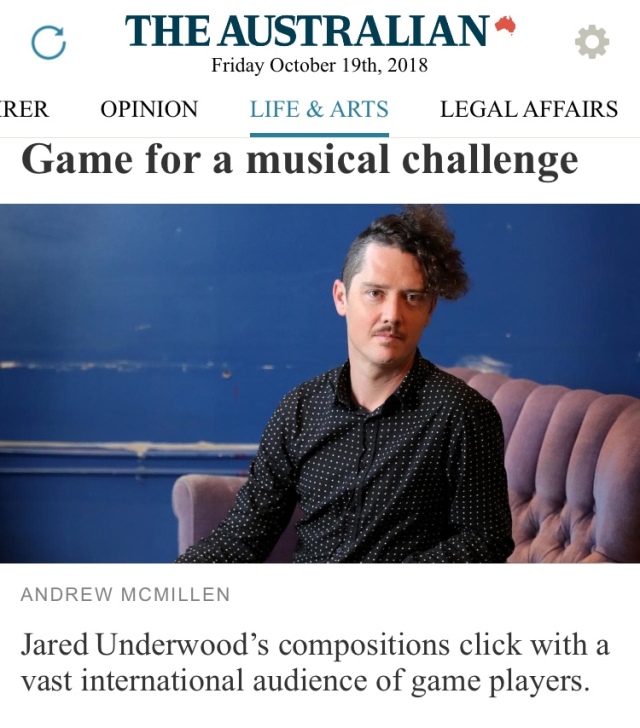